So that’s it – after an entire year of preparation, my African adventure is over. The final few days of my trip were the best by far, and I can’t believe how quickly the time went. I felt like I’d only just arrived, but equally I was so used to the lifestyle I felt like I’d been there for months. Here’s what I got up to on safari and at the opening day of the playground.

Today was very dull as we continued our journey back to Jinja in East Uganda, which took 12 hours. It was exactly the same journey as when we travelled west, just going the opposite way, and stopping at the equator was far less interesting the second time around! This time I took a travel sickness tablet so felt much better, and spent most of my journey looking out of the window – what I did notice was how the same yellow jerry cans we used to collect water at the school seemed to be used all over the country, and that phone credit is sold absolutely everywhere (something you wouldn’t see in the UK!). Highlights of the journey included part of the driver’s wing mirror falling off and spotting a forest fire on the mountain as we left. We returned to the Nile River Campsite for an evening of games and drinks before heading to bed early, ready for our weekend of safari.

A 6am start set us off on our journey to Murchison Falls for my first ever safari! The first stop on the quest to find the Big Five was at the Ziwa Rhino Sanctuary, the only place you can find a rhino in Uganda after they were reintroduced to the country following extinction in 1983. The species here is a white rhino – ironically they are not white, it just turns out that someone misheard the word “wide” (they eat 150kg of grass a day and can weigh up to three tonnes). We got really close to a mother and baby and got some great photos – one even jumped when I sneezed! It really hit home when the guide told us that humans are

rhinos’ only predators. I really want to look into supporting experimentation to devalue ivory when I return home, because poaching has to stop. Almost 1,500 rhino were killed in South Africa alone last year.

After another few hours of travel and a stop off for lunch we reached the gates of Murchison Falls, the largest national park in east Uganda. The huge family of mischievous baboons at the entrance showed us that we were in for a treat – when we finally reached the Red Chilli Camp where we’d be staying, the first thing one of the monkeys did was jump on top of our matatu and steal one of the pineapples our driver had bought earlier that day… We then started setting up our tents (being a stereotypical girl I had no idea what I was doing and made Matt do it for me instead) and then had dinner while watching various animals wander into our camp, including a couple of warthogs and a hippo. It was an interesting night full of noises and hippo shadows across our tent, but we hid our food so didn’t have any trouble!

I couldn’t believe it was the first day of safari, something I’d dreamed of doing for my entire life. The guide met us from one of the first ferries of the day and we were clearly in for some big excitement – as soon as we started on the game trail we had already seen some water buck and antelope. Our matatu had a special roof which popped up to transform the vehicle into a safari jeep, allowing us to stick our heads out of the top. The 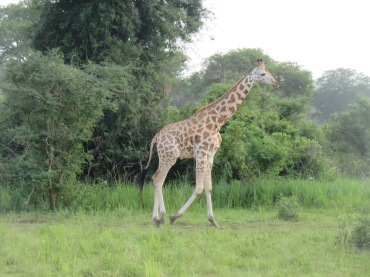 views across the plains were absolutely beautiful – at times looking straight across the Nile – and there was always so much happening at once that it was hard to know where to look first.

After seeing some beautiful giraffes, which ran very gracefully, and spotted a shy lioness in the undergrowth when we went slightly off the trail, I made sure I started looking at my surroundings properly rather than just through a lens. I got some incredible photos but there were some things a camera just could not capture, for example, the sounds of the African birds singing to one another, butterflies drifting across the plains, and a tiny bright scarlet fluttering bird. Spying a herd of elephants just about made the day and we headed back towards camp satisfied with our first day of safari, and narrowly avoiding a storm and downpour of rain. With a river safari to look forward to the next day, I found it difficult to imagine having to leave Uganda in just a couple of days.

The morning began with a river safari, which was something I had been really looking forward to. We boarded a boat that was called “Sian” (obviously I had to have a photo 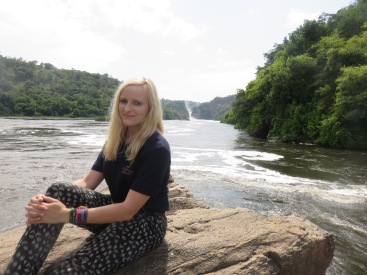 taken on it) and then our guide set to pointing out wildlife in the water, including a mother and baby hippo and a lot of crocodiles of various sizes – apparently they can grow up to six metres in length! It was actually quite scary watching the animals stare at us closely and then glide under the water to pop up somewhere else entirely. We then approached Freedom Falls on the river, got off the boat and started a hike up next to it in the boiling weather. It was tough because of the heat but was definitely worth the effort, as the view over the top of Freedom Falls was absolutely stunning: you cannot see it from river level properly. Looking into the Devil’s Cauldron of the waterfall was a very special moment, as the sun shining on the spray produced a small rainbow over the top.

The afternoon was spent travelling back to the Nile River Campsite in Jinja, and I was really looking forward to our final full day in Uganda.

A late breakfast preceded the opening day of the playground back at Huda, and I had no idea what the day would be like. In fact, it was one of the best days ever. Upon arrival at the school the children were buzzing to get on the playground, and the finished product looked fantastic. It was so colourful and the centrepiece complex with a slide and climbing frame was definitely going to be really popular. The day’s programme began with some singing and dancing from the children and then the directors of the school gave some speeches in Lusogan, which were translated by an East African Playgrounds staff member. I’m not sure he really understood the idea of translation, because he seemed to always talk for much longer than the speaker and occasionally even translated English into English…

The speeches went on for a while, and I started to get hungry for lunch and itching to get on the playground along with the children. The programme ended with the volunteers being presented with certificates and some Ugandan comedians performing, who were dressed up almost like 15th century English clowns, and it was extremely bizarre. Finally after a lunch of chicken we could throw ourselves into our creation. I’ve never seen so many children go down a slide at once. They all got knocked off at one point or another but I never saw a child cry – the day could not be filled with more happiness or laughter. The day ended with a final dance with the children clinging onto our hands and I strangely enough did not feel upset at all leaving Huda. The day was too happy to feel sad and although I was leaving some lovely kids behind, I was also leaving behind something which would have an impact on their lives for a long time, which I felt was more important than my actual presence. I am so proud of what we did and I will remember it for the rest of my life.

We headed back to the Nile River Campsite for dinner, which was a goat the school had gifted to us (I would feel bad after seeing it alive, but it was delicious) and then had a big party to celebrate our final evening in Uganda. Saying goodbye to the builders and East African Playgrounds team was sad, but it genuinely was one of the best days I’ve ever had.

I spent the journey to Entebbe airport capturing my final glimpses of Uganda and reflecting on my last few weeks in the sun with a chapatti. I mean sure, I’ll miss rolexes, seeing strange things on the backs of bodas and waking up to the calls of cockerels and fluttering insects every morning, and I will never appreciate flushing toilets, lights and hot showers more. But I’m not going to overdramatise my experience and say rubbish like “it’s changed my life” and “I’m a different person” because that’s just not true – I’m going to go home and continue living my life in pretty much the same way. I would like to make a few changes here and there though, if I can.

Living simply over the past few weeks has made me realise just how much I use at home which is unnecessary, so I’m going to keep an eye on my wastage and try and stop throwing things away. For example, I donated most of my clothes and shoes to East African

Playgrounds before leaving, because otherwise I knew I’d get home and never wear it again. I want to cut down on social media and spend less time looking at my phone and at things through screens, as life is too short to not look at it properly. And finally, I now have a different perspective on poverty. By not having access to things like smartphones and Macs, the children aren’t necessarily deprived. They would be in our society, but they live in a very different culture. We can’t change their culture (and I believe we shouldn’t) so we need to focus on making the lives they have better – and that’s why I will still strongly support East African Playgrounds throughout my life. The charity gives children the gift of learning and play, and that’s what they need to make their country a better place, and grow up to become influential people in society. And I’m extremely proud to have been a part of that.

Up until a couple of days ago, I was actually pretty nervous about returning to the UK, because I’m beginning a huge new chapter of my life as a graduate. But after a lot of thinking while travelling I am so, so ready to take it all on. I’m feeling positive about my future and cannot wait to see where my career takes me. Next stop once I’ve got the paint out of my hair? Journalism training in London!

Have a read of my last two blog posts here and here.