So here we are. If you’re reading this, you’ve met me on the other side. My aches and pains have (almost) faded away and I’m finally feeling a little more human. At the weekend I managed to tick off a huge item on my bucket list – I ran the Shakespeare Half Marathon in Stratford! And not only that, but I completed it in the time of 2:18:27, which I’m incredibly happy with.

And now I’m going to

tell you about my journey. Excuse me if I sound incredibly hyperbolic and overdramatic, but this was genuinely one of the toughest physical challenges I’ve encountered in my life so far, and is something I’ve always wanted to achieve. So I’m pretty proud of myself, really.

Less than one year ago, I decided that I’d had enough of my lazy university lifestyle and the amount of weight I’d put on. Gone were the frozen chips and the jaegerbombs every single night; I decided to replace them with vegetables and exercise. After a lot of thought around the matter, running was to be the sport for me – I’d always enjoyed it when I was younger and I was pretty good at it from what I remember (cross country champion of 8CS in 2007, and yes, I’m still proud).

About three months into my foray into the world of exercise and I’d gradually improved my fitness, at the time running 5km with ease. So when I received the news last October that I was to be a leader on Warwick’s Uganda Gorilla Trek and needed to raise £1,700, I decided that I needed to do something big. And before I knew it, I’d signed up to run a half marathon on 26 April 2015.

I’m going to be honest here – I definitely could have put more into my training. I downloaded a ten-week plan off the internet that conveniently began in February, which already was not the most ideal time of year. Juggling a five- or six-day running plan with the student lifestyle of drinking and essay deadlines was tough, and I missed the odd day here and there. It was much easier at the beginning of the training plan when the runs were shorter, but as the distances became longer I had to dedicate more time to the cause. Those of you who know me well know exactly how busy I am, and having to go for an hour and a half run was difficult to schedule in!

Still, everything was going really well until a few weeks before race day, and unfortunately my nan, who I am very close to, was taken into hospital. This threw me completely off track even with my university work, let alone running, and I didn’t really do anything for about two weeks. Not ideal. But after several days of moping, something clicked and I was desperate to get back in the game. I won’t go into too much detail but part of my nan’s condition means she has lost the majority of the movement in her legs. And I realised that I needed to stop sitting around worrying and get out and run – after all, it sounds morbid but you need to do everything you can while you still have the chance. You don’t know what is going to happen.

Then before I knew it, race day was upon me. I had a kind of nervous excitement in my 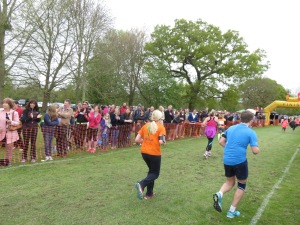 stomach as I waited at the start line with thousands of other people – but also, it was pretty interesting to see the types of different people who were also taking part in the race. There is definitely no clear cut “type” of runner, either – a wide range of sizes, ages, heights, whatever. And everyone was doing it for different causes: sometimes just personal achievement, but more often I saw a charity t-shirt like mine. For the heart, for the lungs, for people with diabetes or even the RSPB. Looking around at all these people made me feel part of a community – after all, we had nothing in common but that finish line.

The gun went off and the atmosphere was absolutely incredible – running alongside thousands of other strangers made me all the more motivated and determined to do it. I remember thinking that the cause I’ve been raising money for, East African Playgrounds, is just as important as all the others alongside me, and I wanted to do the charity proud. I really enjoyed the first stretch of the run through Stratford, symbolically running past the RSC (after all, we were running the Shakespeare Marathon and as I study Shakespeare, I definitely thought it appropriate that it was my first half marathon). I ran the first little bit in the infamous Christmas pudding costume too (see above – if you don’t understand, don’t ask), as I’d promised to if my donation amount hit my £1,000 mini-target. But I ditched it with my parents as soon as I could, because it was difficult to run in and I would have completely boiled. But I think I’d done enough to make a point!

I loved how hundreds of strangers lined the streets cheering us on – it didn’t matter who you were or how fast you were running, you’re all just taking part in this amazing race. A personal highlight was the little old lady waving at us through her kitchen window. When I reached about 10km, having already run through a few miles of countryside, I remember dreading how far I had left to go. I definitely reached a wall by about 11 miles and found the last couple of miles extremely difficult – by the time I made it back to Stratford I hardly noticed the crowds surrounding the finish line, and I just had to push on through. Then suddenly, before I knew it, I had crossed the line and a man was placing a medal around my neck. Oh, and I later discovered it had a Shakespeare quote on it, which made me happy. 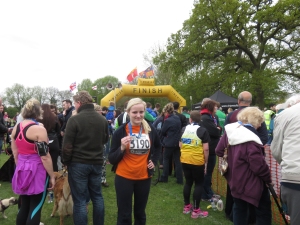 I couldn’t believe it – I’d completed my very first half marathon! I remember thinking in my zombified state that there was no way I could have done that a year ago. And now I’ve almost fully recovered from the state of shock my body was in, I think I’ve almost forgotten the pain. Difficult? Yes. But would I do it again? Yes. I’ve caught the bug for it and I want to remain at this level of fitness – I’m fitter than I’ve ever been in my life. And yes, I’m going to say it… One day (probably in the distant future) I want to run the London Marathon. Watch this space!

You can still donate to my JustGiving page here. Please do, it’s a fantastic cause and I’ve worked really hard!

Journalist and editor from the UK. View more posts

One thought on “Sian runs a half marathon”