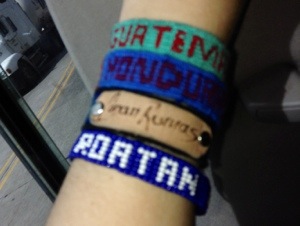 Apologies for the lack of post yesterday – last night was, to coin a phrase, very ‘YOLO-style’. However, I am officially in Nicaragua!

We got up very early to sadly say goodbye to Roatan. I absolutely loved it there! May end up having to go back, because I’m pretty sure I must have left something behind in the rush to leave my room… What a shame.

We got taxis to the port at 6am and the ferry journey was a lot smoother than on the way there, as we weren’t moving against the wind. I also managed to sleep through most of the two-hour trip so it went quickly. We then got a private bus from mainland Honduras to begin our twelve-hour journey to Leon in Nicaragua. The mountainous scenery of Honduras was stunning, and we saw a lot of culture, for example, people wandering through the traffic trying to sell us things through the window. It rained a lot (although it did dry up very quickly), and although Nicaragua is less sunny than Honduras and Guatemala, it is more humid. The bus had air conditioning however so I was quite comfortable on the journey, and our bags were carried on the roof of the bus, too. Very old school.

On our way to the border we travelled through the outskirts of Tegucigalpa, and I am very pleased we are no longer staying there. It definitely looks nicer from the mountains than up close: most accommodation buildings are very basic, with no windows or just bars across them, and usually single storey. Many people have blacked out the windows in their cars and there are men with guns everywhere. It was still worth seeing though, I suppose just to say that I’ve seen the most dangerous city in the world.

We reached the border of Nicaragua at around 9pm, and they fumigated our bus (luckily not with us in it), which took a while. We had a few problems getting to our hostel, as they wouldn’t answer Marvin’s phone calls, so we had to find elsewhere to go and ended up lost somewhere in Leon. At around 12.30am we finally found somewhere to stay, which was basically tables with sheets on and they were not particularly comfortable (Kai’s collapsed under him whilst he was asleep). The windows and doors were open all night, allowing a whole host of mosquitoes and even bats in… It wasn’t the best night’s sleep I’ve ever had.

We got up early to go volcano boarding on Volcano Cerro Negro, which is basically snowboarding but across volcanic ash instead! We were given suits and goggles to wear, which looked ridiculous, and after a very bumpy van journey we had to hike for 40 minutes up the volcano. It was a lot tougher than I thought it would be: the ground was really rough which was a struggle to begin with, but we also had to carry the volcano boards which were heavy, and caught the strong wind as we walked up the volcano, making them hard to control. We looked at the crater – the views at the top of the volcano were absolutely stunning – and then it was time to board! It was great fun, as you go really fast, but I found it pretty hard to control the board and it kept getting stuck in the ash. I would have liked to have had another go actually so I could improve, but I couldn’t have beared the difficult walk again! Apparently volcano boarding is on the list of “The eight craziest things to do in the world”.

We rushed back to our hostel/dorm place and grabbed a shower as we were all covered in dirt, and then we made the (much shorter) three-hour trip to Hotel Cocibolca, which is named after the local lake, in Granada. Granada is apparently the sister town to Antigua in Guatemala, and very similar it is, too! It is arranged in blocks and has a plaza in the middle, with a church. It is just more lively as there are more tourists, and there are also really cool houses with enclosed courtyards in!

In about an hour we are heading off for dinner to a sports bar called Kelly’s (sound familiar, Leamington people?!) so it should be a relaxing evening. And we don’t have to travel tomorrow, either!