On Thursday evening, I was lucky enough to receive an invitation (thanks, Jo!) to the launch night of Turtle Bay, a new Caribbean restaurant in Leamington Spa. 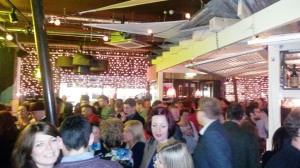 Upon entering the restaurant I was immediately drawn to its layout and style; the large bar in the middle of the room suggests that the wide range of drinks and cocktails offered by Turtle Bay will be right at the centre of the atmosphere. The walls and bar are tastefully decorated with painted boards in the colours of the Jamaican flag, simple blackboards presenting the highlights of their menu, and modern artwork including a large painting of Bob Marley.

The launch party was absolutely packed; I was surprised at the number 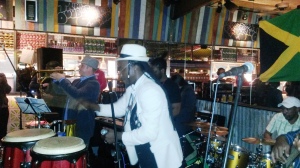 of people dressing to impress. A lot of women were wearing evening dresses and some of the men were even wearing suits – although this may sound over the top, considering the smartness of the building’s interior and the variety of people there, it actually worked quite well. There was a live reggae band with an absolutely fantastic vocalist who really set the atmosphere for the crowd, particularly later on in the evening when he passed around some tambourines. The band performed a fusion of classic reggae mixed with songs in popular culture, for example, ‘Royals’  by Lorde, producing a fresh new version.

The bar had a more limited cocktail menu than it would normally, as the barman told me, and the establishment would be launching a happy hour two-for-one deal upon opening. I began with a classic mojito, which went down very well as it was just sour enough, and remained on the Bay Caipirinhas for the rest of the evening, as they had a refreshing citrus tone which complemented the food served particularly well. I did also try the apparently infamous Wray ‘n’ Ting, which was extremely strong, but I wasn’t keen on its bitter flavour.

The staff were extremely welcoming, explaining what each of the dishes and drinks were, providing us with napkins and telling us more about the restaurant. Some of the food I 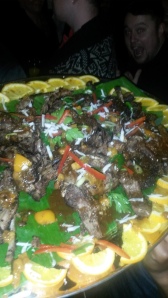 tasted included jerk chicken, jerk ribs, chilli fried squid, patties, sweet potato fries and dumplings. The sweet potato fries were beautiful, crispy and tipped with just the right amount of salt, and the squid was again very crispy and not cooked too much that it went chewy, which is quite common in British restaurants. The jerk chicken and ribs were delicious, some of which were spicier than others (many were coated with what I think was orange and mango; see left and appreciate the foodie photobomb), and the heat of the Caribbean food built up nicely so that it wasn’t too overpowering. I was impressed to hear that food suitable for vegans was available, however the only problem I found was that it wasn’t particularly easy to eat as buffet food. The sauce made everything very messy and fried chickpeas were also being served, which were completely impractical to eat whilst trying to dance and have a drink.

Despite this small problem, I was given a great taster of the variety of food the restaurant has on offer, and really want to go back and experience it as a calmer restaurant where I can sample the food in a full meal (the prices on the website seem pretty reasonable). As a launch party the event was clearly a great success – I can see some kind of student party night taking place here in the future – and I believe Turtle Bay has a lot of potential. I can’t wait to see what it comes up with!